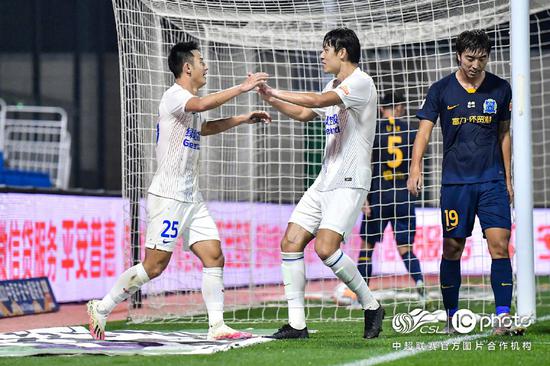 Five weeks ago, Shanghai Shenhua, who ranked second in the division, lost 2-3 to Guangzhou R&F. At that time, many people might not realize that this loss almost became a turning point of the season.

After 7 unwinners and 4 consecutive draws, on the evening of the 24th, on the same opponent R & F, Shenhua, who played in the "All China Class", won 2-0 at the most critical moment of the fourth guarantee and continued to rank first in the standings. four.

In the last round, even if Shenhua loses, there is a high probability that Shenhua will ensure the top four, and the team has completely occupied the initiative in the fourth.

Cao Yun will put on the captain's armband.

There are only the last two games left in the first stage, and Shenhua really fights for "exhausted ammunition."

"Our foreign aids are currently more or less injured. Considering that the opponents’ players are all quick-witted technical styles, we have also deployed the corresponding personnel. In addition, we must not only consider this game, but also Consider the arrangements for the next game."

In this game, Cui Kangxi arranged for Bi Jinhao to play center, and Peng Xinli was active behind him. Together with Cao Yunding, this was also Shenhua's first full attack firepower.

This attacking lineup has received very good results. Peng Xinli scored the first goal after a single-to-multiplayer breakthrough in the first half. In the second half, he flew the header to Bi Jinhao, who drove the ball into the penalty area and extended the score to 2. -0, Shenhua kept the score to the end.

Cui Kangxi was very satisfied with the performance of the players after the game. "This season the team has introduced a lot of internal aids and has strong players in all positions. In this game, Bi Jinhao and Peng Xinli both completed the offensive and defensive tactics. Deploy and play can score 120 points."

This is also the sixth match of Shenhua's season with zero seals. In the past few seasons, when encountering large-scale injuries to foreign aid, Shenhua is prone to crash directly and often suffers three or four goals.

The arrival of Zeng Cheng, Feng Xiaoting, and Mbia this season has greatly increased the thickness of Shenhua’s defense line. As long as he can defend it, at least he will not lose; once he encounters R&F, he can see holes in the universe. The defensive line can naturally wait for the opportunity to score.

Before this round of competition, Shenhua, Shenzhen, R&F and Dalian people all had a chance to finish fourth. These four teams faced each other-Shenzhen defeated Dalian people 3-1, Shenhua won R&F 2-0, and two teams lost. The ball team directly withdrew from the battle for fourth place.

Shenhua played eighth place in the final game against Henan Jianye, while Shenzhen will face second place Jiangsu Suning. In terms of points, Shenhua has the upper hand, and the opponent's strength is also obviously stronger than Jianye. It should be said that Shenhua has a relatively large advantage.

Shenhua only needs to beat Jianye to ensure the top four, but the only game that Jianye did not lose during this period was a goalless draw with Shenhua.

And Jianye new coach Havel is the former assistant to the Shenzhen coach Cruyff, the relationship of fellowship, Jianye really wants to send all the "households" to stop Shenhua, it is absolutely reasonable.

You must know that Jianye's strength is not bad-if the four foreign aids Ivo, Kalanga, Bassogo, and Dorado are all on the field, the combat power must not be underestimated, but Jianye's greatest reliance on relegation.

Suning’s attitude is also very important-they are now on the same score as Luneng, and they are ranked second with each other's results, which means that as long as Suning defeats Shenzhen, they can be sure of second place, so that they can avoid the first round of the knockout round. SIPG and Guoan, this will undoubtedly help the team continue to move forward.

Suning coach Olaroyu said after the game, “It’s not time to relax, because the next game will be against Shenzhen, and we still have to fight for second place. Our team and our players have this ability. Hope to get second place, and they deserve that ranking."

Shenzhen coach Cruyff said, “First of all, we have to be ourselves. This is something that is in our own hands. We need to go all out to win the game and watch it later.”

"We don't worry about other things that are not in our control."